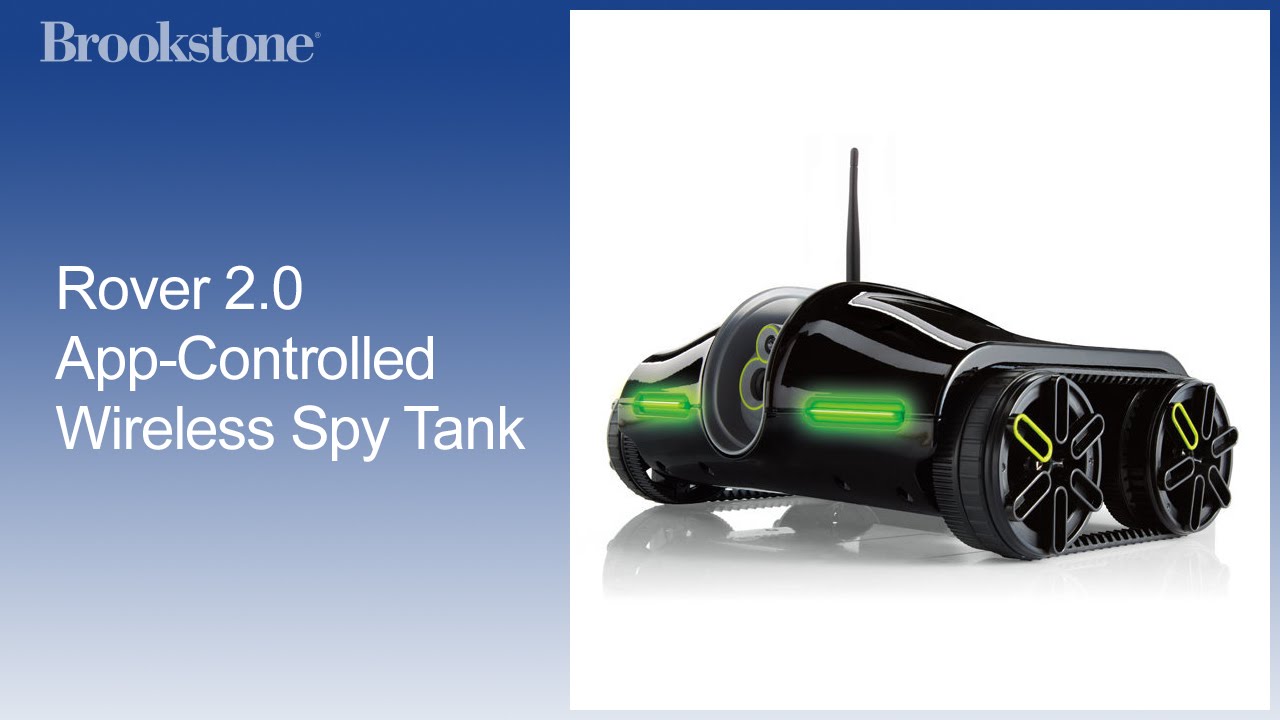 Brookstone's Rover 2. The sneaky little pod transmits video and sound to the smartphone apps controlling the device. It's the high-tech surveillance equivalent of sitting next to a door with a water glass pressed against the wood. We got our hands on a pre-production version of the Rover 2. The Rover 2. It still captures photos, just like its predecessor.

But the new Rover also brings video capture to the mix. The photo and video quality isn't the greatest, but considering the shooting angle of the photos and video are from shoe level you're not exactly going to use the footage as Facebook profile pics. The new app uses sliders instead of buttons to steer and accelerate the tank. The sliders are better than the buttons of the previous app but offer very little in the way of speed control.

The tank has two speeds: Stop and go. One of its best features was also in the original Rover: night vision.

It's the ultimate in sneaky, assuming your intended target is hard of hearing. The little tank still makes quite a bit of noise rolling around.

So, it's more of a mostly stealth mode. Rover's biggest issue is a short battery life. The little tank isn't rechargeable; it runs on AA batteries.

And because remote vehicles are power hungry, after just a few sorties, you'll need to head down to the store to buy more batteries. But those shortcomings don't ultimately matter very much. The bot hosts a Wi-Fi network for you to connect to, which theoretically means you can operate it from your iOS or Android smartphone or tablet from up to feet away.

Wi-Fi is easy to configure, but it posed a serious problem since anything that affects Wi-Fi performance also hinders the performance of the bot.

The weaker your Wi-Fi connection, the worse the video feed from the Rover. The worse the video feed, the more difficult it is to control. After the bot is a certain distance away from you—which turned out to be about 50 feet around our office—it just stops responding consistently. Our office is feet wide, and I couldn't make it to the other end using the video feed alone.

The controls are also tricky by themselves, and require you to move two sliders that sit on opposite side of your screen to drive each of the bot's caterpillar tracks. This is useful for precise turning, but the video stream lagged too badly in my hands-on time for anything precise. One other thing to note is that the rover does make a substantial amount of noise.


You probably won't be sneaking up on anybody unless they're sleeping like a log, or have headphones on. The "stealth" mode does nothing but turn off a tiny green LED indicator on the top of the bot. Criticisms aside, the rover was a lot of fun when we used it in a small area, and when you have a competent control over the bot. I want to like the bot so much, but I think I'll just wait and see what hopefully Rover 3. The Rover 2.